A quickly increasing number of Axon Framework users are deploying their applications to Kubernetes. For good reasons! One of the main use cases of Axon is to write (evolutionary) microservices systems. Containers are ideal for providing isolation between microservices instances without incurring the overhead of full-blown VM instances. But these containers have to be managed. Kubernetes has emerged as the clear winner in this space, with Google Cloud (GKE), AWS (EKS), and Azure (AKS) now all offering managed Kubernetes options.

When distributing an Axon Framework application across microservices, one needs to set up distributed versions of Axon’s CommandBus, EventBus/EventStore, and QueryBus. While there are multiple ways of doing that, using AxonHub and AxonDB is, by far, the easiest. All that needs to happen at the application level (assuming Spring Boot) includes the AxonHub Spring Boot Autoconfigure dependency and set the property axoniq.axonhub.servers to point to the AxonHub server. All discovery and routing pattern setup will take place automatically from there, and the AxonHub console will provide you with a graphical overview of your distributed Axon application.

In a setup like this, it would, of course, be desirable to run AxonHub and AxonDB themselves on Kubernetes as well (although to be sure, this is in no way a requirement of AxonHub or AxonDB). In this blog, we’ll explain how to set this up. We'll focus on the non-clustered set up in part 1. In part 2 of this series, we'll cover the clustered setup. Again, we'll focus on simple deployments (no SSL, no authentication, mostly default settings) except for the clustering.

AxonDB is an optimized, scalable event store implementation, while AxonHub is an intelligent message routing platform for commands, events, and queries. It is possible to use AxonDB as an event store while not using AxonHub. But AxonHub does currently require AxonDB as an event store - so if you want to set up AxonHub, you will need AxonDB. In this configuration, your application will only communicate with AxonHub. AxonHub will contact AxonDB for event storage, retrieval, and tracking.

The (non-clustered) developer editions of AxonHub and AxonDB can be downloaded for free. They are distributed as zip files containing the jar binaries, documentation, and other files. AxonIQ is working on publicly available Docker images and potentially Helm charts as a distribution model. Still, for now, you will have to build your own Docker images using the downloaded binaries.

We'll assume you're using AxonDB 1.2.3 or higher and AxonHub 1.0.3 or higher in the rest of this blog. All the Docker and Kubernetes files we refer to below, and cheatsheets with commands to issue, are available through this GitHub repo.

AxonDB is a Spring Boot Java application, so running it on Docker follows the Spring Boot with Docker getting started. (But we can use the OpenJDK JRE image instead of JDK, as the full JDK is unnecessary for AxonDB.) Our jar file is axondb-server.jar. AxonDB takes advantage of Spring Boot's facilities for externalized configuration. Specifically, we will have properties set in an axondb.properties file included in the container, but these can be overridden by environment variables as required.

When setting up the properties and Dockerfile for AxonDB, we need to take the following into account:

AxonDB needs to store data persistently. There are two things to consider: the event data itself and the control database that contains AxonDB dynamic configuration (access tokens etc.). We can, for instance, store both in a VOLUME on /data by setting the following properties:

The AxonDB data connections use gRPC. On top of that, AxonDB implements a mechanism to support clustering, which we also have to consider when running in non-clustered mode. The client connects to any AxonDB instance it knows, and that instance will tell the client which is the appropriate instance to connect to (the current master). This requires that the AxonDB instance knows a hostname on which the client can find it. By default, it will use the system hostname for that. When running Docker, this will default to an arbitrary hex name like 6fd6e4b9f41e. You can, of course, instruct Docker to set another hostname using the -h flag. When using networking between containers, that may be sufficient. In the common scenario where you want to run a Docker container with AxonDB, to be accessed by your application started from an IDE, not in Docker, you can override the hostname that AxonDB uses to communicate to clients:

As this is environment-specific, it makes sense to specify this as an environment variable rather than include it in axondb.properties in the image.

Suppose you don't COPY an axoniq.license file into your container, it will run in Developer Mode, which is restricted to 1 GB of event storage. Contact us for a trial or production license of the non-Developer editions.

When running a quick test with AxonDB on your local machine, you may ignore all memory settings, but this will quickly lead to trouble in the production or Kubernetes scenario. The following facts play a role:

For this reason, explicitly setting heap size in the Dockerfile makes sense, as well as explicitly providing a memory limit when starting the container.

This is very similar to running to AxonDB, with the following differences:

Once you have Docker images 'axondb-single' and 'axonhub-single' built as detailed above, you can create the following setup, which is useful for developing locally against AxonHub. For example, to run both AxonDB and AxonHub as Docker containers, while connecting your application running on the host to AxonHub, you could do:

From Docker to Kubernetes

Running AxonDB and AxonHub on Docker is an important step towards running it on an actual Kubernetes cluster, but we're not quite there yet. First, of course, we need to push the image to a container registry where the Kubernetes cluster can get it. I'm mainly running on Google Kubernetes Engine and push the images to my Google Container Registry. The process for doing this consists of tagging your local build of the container image with the name of the registry you want to push it to, and then doing the actual push, like this:

(And similarly for Hub, of course.) So, now we have the images in our container registry, from which Kubernetes can run them. How to do this? In case you're new to Kubernetes, knowing some terminology may come in handy:

The most naive way to start a Docker container on Kubernetes would be kubectl run axondb --image=axondb-single which would run the image using many defaults. This will create a Kubernetes workload of a pod (with only the axondb-single container), controlled by a Deployment controller. This controller will try to run the requested number of replicas (default 1) of the pod/container. However, an important thing to note about Kubernetes is that pods are mortal or ephemeral. They don't have a stable network identity, and they don't have any persistent storage attached. The network identity issue by itself can be solved by putting a Service in front of it. But that doesn't solve the persistent storage issue. Also, standard Services don't play well with AxonDB and AxonHub clustering, which we'll cover in part 2 of this series.

Luckily, Kubernetes has a solution for this, called a StatefulSet, a controller just like the Deployment controller, but with better functionality for our requirements. As for network identity: StatefulSets have a name, and if the name of our StatefulSet is, for instance, axondb, the hostnames of instances will be axondb-0, axondb-1, etc. This provides us with the stable network identity we need.

To make our AxonDB and AxonHub instances available for use, we need to do to things:

Finally, we need to ensure that our data persists, even when containers are killed and new ones are started. To make that happen, we need to configure a PersistentVolume and mount it to /data.

Combining all of the above, we can describe our complete Kubernetes deployment as a YAML file (also in our GitHub, of course), like this:

Please be aware that the PersistentVolumClaim won't work as-is on Minikube because of its limited support for persistent volumes.

The README.md files in GitHub provide some useful cheatsheets of the commands needed to execute all of this. Now, you should be fully set up to run your Axon apps with AxonHub and AxonDB on Kubernetes! Stay tuned for part 2 in this series, in which we'll cover the clustered scenario. 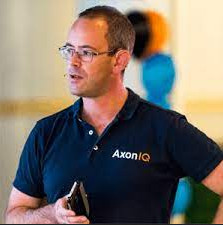 Frans is an evangelist at AxonIQ. He works with existing and prospective Axon Framework users, specifically looking at how AxonIQ's products and services can help them be successful.

Also, he tells the world about Axon by speaking at conferences, running webinars, writing blogs, etc. Before joining AxonIQ, Frans was a presales architect representing Fortify, the world's leading application security testing portfolio, having worked as both a Java architect and security consultant before that.